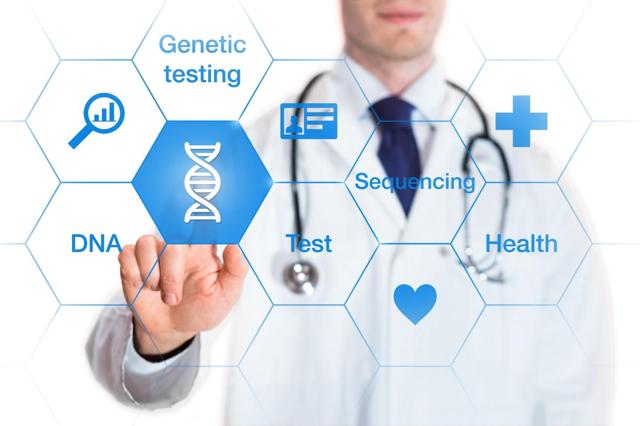 Genomic medicine is the future of healthcare. Spawned by the Human Genome Project (“HGP”), this precise and personal approach to medicine is an emerging discipline with enormous disruptive potential. Though nascent, genomic medicine is showing signs of being the transformative force that has been sought by Silicon Valley and DC politicians for many years. This article kicks off a series on cell and gene therapy and genome (aka gene) editing. Companies in this macro segment will be tagged as follows:

That healthcare spending accounts for 17.9% of the U.S. Gross Domestic Product is enlightening, yet the realization this economic mix was only 5% in 1960 is staggering. We increasingly allocate healthcare funding to treat symptoms, alleviate pain and slow disease progression… and occasionally find cures. Our average lifespan is increasing, which adds years of therapeutic treatments. The current cost curve is untenable yet unyielding. Genomic medicine is poised to change this equation by providing one-time curative therapeutics which will eliminate a lifetime of pharmaceuticals. 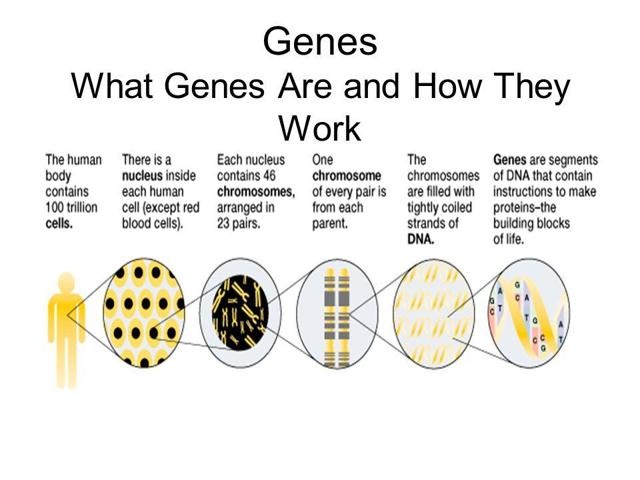 Genes are the building blocks of heredity

Individuals have two copies of each gene, one inherited from each parent. The HGP estimated that humans have between 20,000 and 25,000 genes. Made up of DNA, genes provide the instruction manual to manufacture protein molecules. Gene mutations do not cause disease. Genetic disorders are caused by gene mutations that disturb the functional role of the gene.

Proteins are made of amino acids. They carry the cellular workload, making up about 15% of our body mass. They direct the structure, function and regulation of the body’s tissues and organs through messaging and transportation services, as well as biological catalysts such as antibodies to defend against pathogens and enzymes to direct chemical reactions.

It’s important to note that not all mutations lead to disorders. Mutations are, in fact, common, with only a small percentage of them causing genetic disorders. They also have a positive effect, assisting evolutionary change as genes adapt to the environment. Gene therapy therefore requires a mix of precision and specificity approaching 100% to adhere to healthcare’s golden rule: First, do no harm.

Cell therapies are at the forefront

Cell therapy is defined as the administration of living whole cells for the patient for the treatment of a disease. The origin of the cells can be from the same individual (autologous source) or from another individual (allogeneic source). Cells can be derived from stem cells, such as bone marrow or induced pluripotent stem cells (iPSCs), reprogrammed from skin fibroblasts or adipocytes. Stem cells are applied in the context of bone marrow transplantation directly. Other strategies involve the application of mature cells, differentiated in vitro (in a dish) from stem cells.

Development of cell therapies using T-cells, B-cells, dendritic cells and hematopoietic stem cells (“HSC”) is compelling. The most common approach discussed is T-cells using an engineered chimeric antigen receptor. CAR-T cell therapy is an autologous approach where T-cells are extracted from the patient and modified in a lab to attack disease. The modified cells are then infused back into the patient to kill cancer cells. 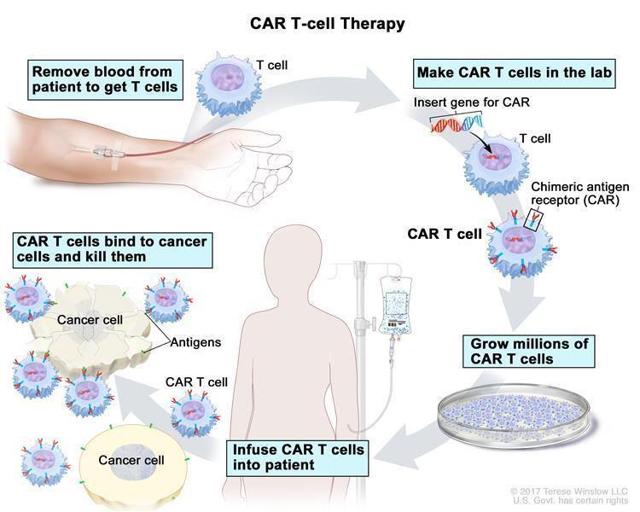 The first U.S. T-cell immunotherapy, Kymriah, was approved by the FDA in August of 2017. Novartis has provided some early commercialization information that can be found in the following graphic. 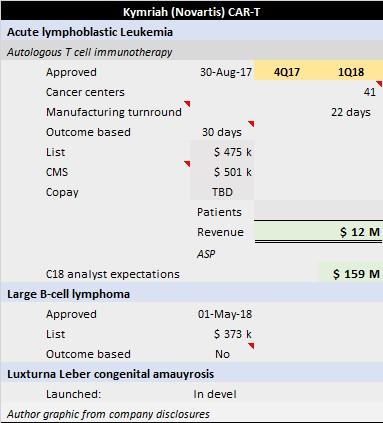 Yescarta was the next approved autologous T-cell immunotherapy. Launch details from Kite can be found in the following graphic. 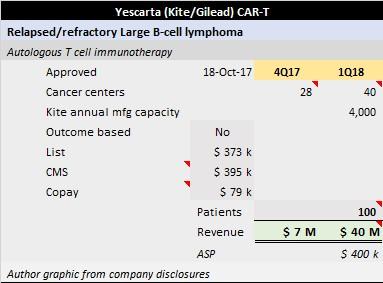 Gene therapy is defined as a set of strategies that modify the expression of an individual’s genes or repair abnormal genes. Each strategy involves the administration of a specific nucleic acid (DNA or RNA). Nucleic acids are normally not taken up by cells, thus special carriers, so-called ‘vectors’ are required. Vectors can be of either viral or non-viral nature.

Luxturna, the first gene therapy in the U.S. targeting a specific gene mutation, was approved in December 2017. Spark Therapeutics has provided early commercialization information on Luxturna as follows: 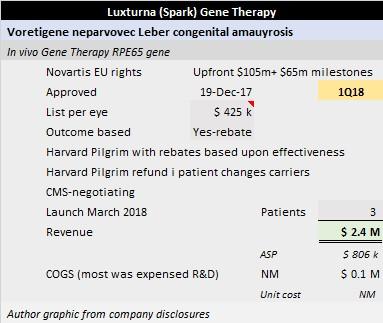 The current list of all cell and gene therapies approved by the FDA can be found here. The early results from these product launches have been labeled disappointing. That reaction seems premature as it will take at least a year to get a real sense of commercial acceptance. These are very complicated therapeutics requiring significant lead times to educate, authenticate, certify, get coverage and then ramp.

Many companies are now pursuing allogeneic cell therapies, commonly called “Universal T cells”. This approach has numerous advantages including cost and time to treatment, but it also has hurdles to be overcome such as graft versus host disease “GVHD”.

The subgroup of genome editing is a bit confusing. Editing occurs in gene therapy and cell therapy so why is there a separate group? The answer to that question comes down to the terms ex vivo and in vivo.

Genome Editing takes place in vivo which is far more complex, though expected to be more durable. Targeting specificity, precision and delivery of the therapeutic to the tissue or organ of interest creates more challenges than ex vivo approaches. The genome editing group can be classified by their editing approach: 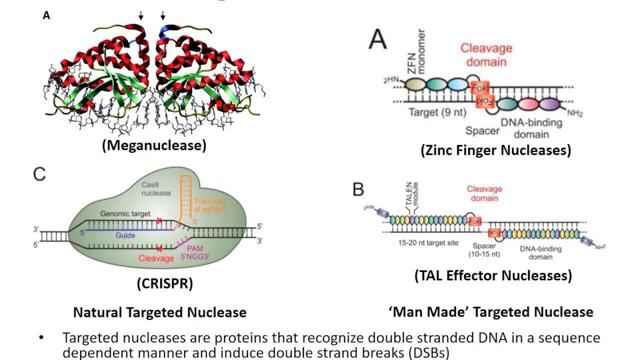 If genomic medicine is poised to disrupt healthcare as posited in the opening paragraph, the biggest impact will be felt by pharmaceutical powerhouses that treat disease. Prescription drugs are a major cost component, made even more so by the tradition of annual price increases despite scale efficiencies that drive down cost. So, what are these companies doing with respect to gene therapy? Disrupt or be disrupted?

The AveXis acquisition was arguably the most eye-opening valuation of the three. The value drivers were time to market (AVXS-101 for SMA Type 1 is projected to be available in 2019) and the company’s commercial scale cGMP-compliant manufacturing facility. AVXS has a less robust pipeline, fewer employees and minimal R&D spending. It is notable how much of the development spend was for stock-based compensation and external license fees (paid to another gene therapy company, RGNX). 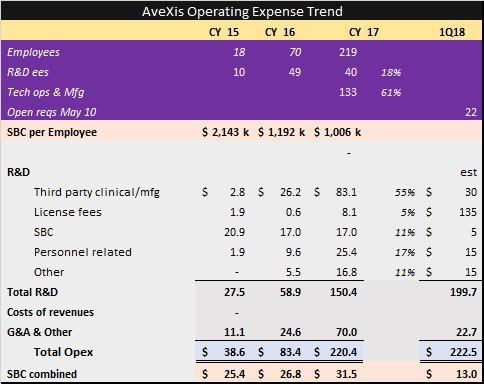 Genome medicine is being ushered in by commercially approved autologous CAR-T immunotherapies and ex vivo gene therapies. The first patient to be treated using in vivo genome editing happened in 2017, and several others have now been treated (Sangamo). The pace of development is accelerating with numerous catalysts, including new clinical trial initiations and trial data readouts. Big Pharma has clearly evaluated the science and has responded by acquiring assets and signing collaboration agreements to participate and commercialize. It certainly appears they see this disruption coming and are not going to be left out.

Investor be forewarned: This is a very volatile space. Many of the trials are being initiated for rare diseases for which there is no alternative treatment. These patients are dealing with serious medical issues and life expectancy, at times, is quite short, accelerating FDA approval to provide some possibility of improved quality of life. These conditions are likely to lead to news similar to that of Juno last year, which led to a significant drop in valuation.

My next article is currently being written, looking at the amount of capital being raised by the gene and cell therapy group and what their operating trends are through the first quarter of 2018. This week, most of these companies will be presenting at the 2018 annual meeting of ASGCT (May 16-19). This is frequently the venue of choice for significant updates, which I hope to use in future articles on individual companies in the group. The following graphic summarizes this tracking group.