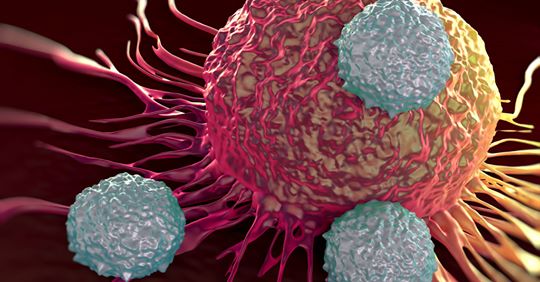 In April Bay Area biotech Revolution Medicines completed its pivot from a company focused on antifungal treatments to an oncology business. This morning Revolution’s shift paid off with a development deal worth up to $500 million with Sanofi.

The two companies announced an exclusive global partnership to develop targeted therapies based on the biology of the cellular enzyme SHP2, which is part of the protein tyrosine phosphatase family. SHP2 (PTPN11) plays an important role in multiple forms of cancer and in regulating the immune system. Revolution has been focused on SHP2 regulation through the RAS-MAP kinase pathway. The pathway is frequently hyperactive in human cancers. The research has shown that some mutated forms of proteins in the RAS-MAP kinase pathway depend on SHP2 for their oncogenic activity. Small molecule inhibitors of SHP2 can reduce tumorigenic effects, the company said.

In a joint statement this morning the two companies said they will focus on non-small cell lung cancer, as well as other unspecified cancers that carry “certain mutations.” Revolution has focused its research on NSCLC, as well as melanoma and colorectal cancers.

The collaboration builds on precision oncology discoveries by the Redwood City, Calif.-based Revolution, as well as preclinical development of RMC-4630, the company’s lead small molecule inhibitor of SHP2. The companies plan to harness Sanofi’s “expertise in oncology research and drug development” as they move forward with the program. Sanofi and Revolution anticipate the start of human clinical trials with RMC-4630 in the second half of 2018.

As part of the deal, the companies will jointly develop SHP2 inhibitors, which are designed to reduce cell growth signaling that is overactive in cancer. While both companies will contribute to the R&D efforts, Revolution Medicines will lead early research and clinical development. Sanofi will take over as the companies move further along with the studies.

Mark Goldsmith, president and chief executive officer of Revolution Medicines, said in a statement that his company has made great progress in “elucidating the role of SHP2 in cancer” and driving RMC-4630 into clinical development. He said the collaboration with Sanofi will allow his company to continue its momentum as an oncology business.

Under terms of the deal, Revolution will receive an upfront fee of $50 million and Sanofi will cover R&D costs for the joint SHP2 program. Sanofi will receive an exclusive worldwide license for global commercialization of any approved products targeting SHP2, subject to a U.S. co-promote option for Revolution Medicines. If all milestones are hit, Revolution stands to pick up more than $500 million.