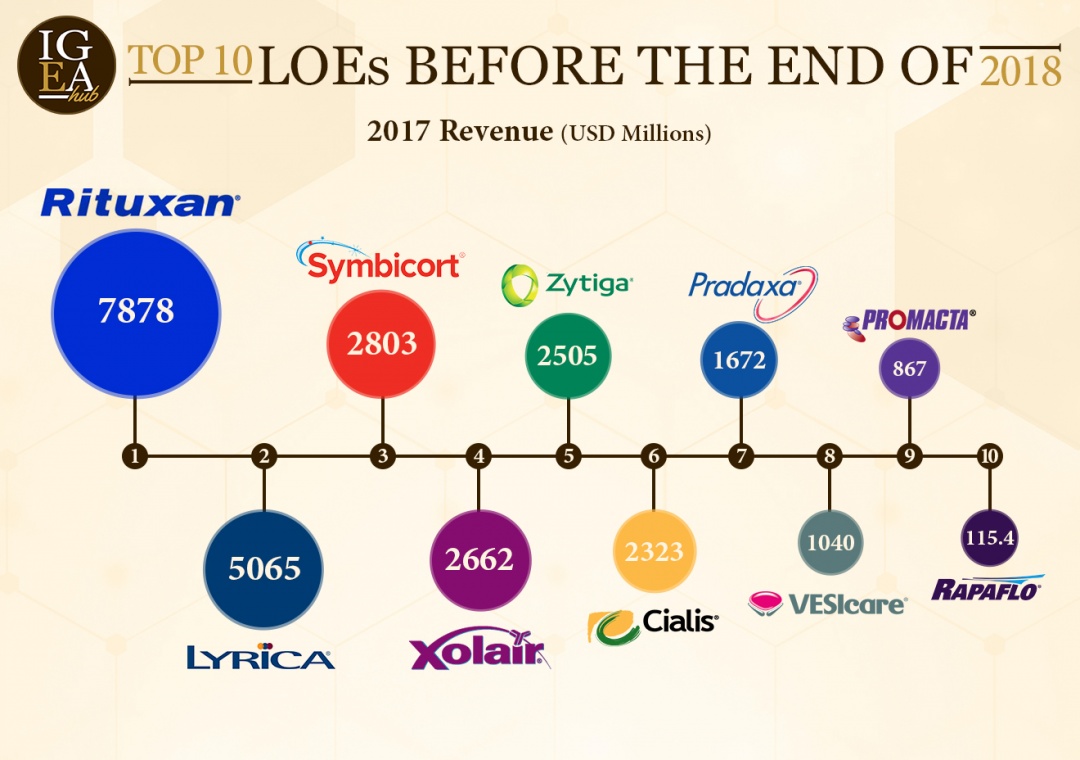 The complete list and analysis of the major blockbusters that will loose exclusivity by the end of 2018. All the pharmaceutical companies facing generic and biosimilar competition.

With each passing year, more drugs lose their patent protection. Loss of exclusivity (LOE) brings a mix of feelings: while it is bad news for the parent company, it is good news for other companies who have been waiting to get a slice of the cake. Patent expirations pave the way for cheaper generics to enter the market thus increasing competition and this eventually results in a decline in sales of the branded drug.

Earlier in the year, some major blockbusters lost their patent protection; some of which have generic and biosimilars competition in the market already. Blockbusters like Spiriva (Boehringer Ingelheim), Sensipar (Amgen), Ampyra (Acorda Therapeutics), and Remodulin (United Therapeutics) fell off the patent cliff this year. 2018 is left with about three months and there are still some drugs yet to lose their patent protection. Here is a look at the top 10 drugs about to lose their exclusivity.

This top-selling drug from Roche generated sales worth $7.9billion in 2017. Rituxan which was first approved in 1997 is indicated in blood cancers including non-Hodgkins lymphoma and chronic lymphocytic leukemia, as well as immunological diseases such as rheumatoid arthritis. It has been forecasted that Roche will record a decline in sales due to increased competition from biosimilars following its anticipated patent expiry.

In 2017, Lyrica’s global sales totaled $5.1 billion, and about $3.46 billion of that revenue was generated in the US alone. Its patency is scheduled to expire by December- implying that its sales will begin to drop as from 2019.

In a bid to extend what’s left of its exclusivity lifespan, Pfizer applied for an FDA approval for a once-daily extended release version for the management of pain associated with shingles or diabetic peripheral neuropathy. They are also working on getting pediatric exclusivity which can extend its patency by 6 months.

Symbicort is a combination medication used in the management of asthma and COPD. This blockbuster drug by AstraZeneca was first approved in 2006 and its patency is scheduled to expire in November. AstraZeneca successfully won a pediatric exclusivity for Symbicort thus extending its protection from generic rivals until May 2019.

Xolair is a prescription treatment for moderate to severe persistent allergic asthma and chronic idiopathic urticaria. Xolair generated a total revenue of $2.7 billion in 2017. The drug is marketed by both Roche and Novartis- with Roche covering the US and Novartis the rest of the world.

A key patent for this blockbuster goes off this year and already companies like Glenmark and Sorrento are working on getting their biosimilars to the market.

Johnson & Johnson’s blockbuster drug, Zytiga, is scheduled to lose its patency in October. The prostate cancer therapy was first approved in 2011.

After a non-favorable ruling at the U.S. Patent Trial and Appeal Board (PTAB) in January that invalidated the J&J patent claim of 2027 for Zytiga, the road to the market for generic competitors is made clear. However, as the expiry date approaches, J&J is undaunted by the impending generic competition and remain confident about the validity of their patent. U.S. generic drug company, Argentum Pharmaceuticals LLC, is working on launching its generic version after the patent expiration.

Eli Lilly’s Cialis was first approved in November 2003 and its patency goes in September 2018. In 2017, the blockbuster drug netted a total revenue of $2.3 billion. Cialis is used for the treatment of erectile dysfunction and is available in tablet formulation in four dosage strengths: 2.5, 5, 10, and 20 milligrams each.

The drug’s primary patent expires in September but they were able to shift competition a bit further by citing a unit dose patent which expires in 2020. Already, Zydus Cadila, Aurobindo, Teva Pharmaceutical (TEVA), Alembic, Watson, Sun Pharma, and Synthon have received tentative approval to market their generic versions of Cialis. However, under the generic settlement, these generic companies can only start to market their versions in September.

Pradaxa is a huge player in the atrial fibrillation market. In 2017, it raked in a total of $1.7 billion. The anticoagulant from Boehringer Ingelheim was first approved in 2010 and its patency expires in November.

Vesicare is an antispasmodic agent used to treat symptoms associated with an overactive bladder. The drug is marketed by Astellas and in 2017; this blockbuster achieved annual sales of about $1 billion.

Vesicare was first approved in 2004 and its patency goes off in November. Astellas has obtained a pediatric exclusivity for Vesicare, meaning its patency has been extended to May 2019. Currently, Teva and Cipla have approved generic versions while Watson, Glenmark, Ajanta, Amneal and Cadila have tentative approval.

Eltrombopag is prescribed for the treatment of anemia and thrombocytopenia. In 2017, Promacta’s sales totaled $867 million. Novartis’s Promacta is set to lose its patency this October. Hoover, they also have scored approval for pediatric exclusivity thus pushing its patent protection 6 months further.

Allergan’s Rapaflo was first approved by the FDA in 2008 for the treatment of benign prostate hyperplasia. Rapaflo had global annual sales of $115million in 2017. By December, Rapaflo will be stripped off its patency. Its generic version by Sandoz and Lupin limited has been approved tentatively.