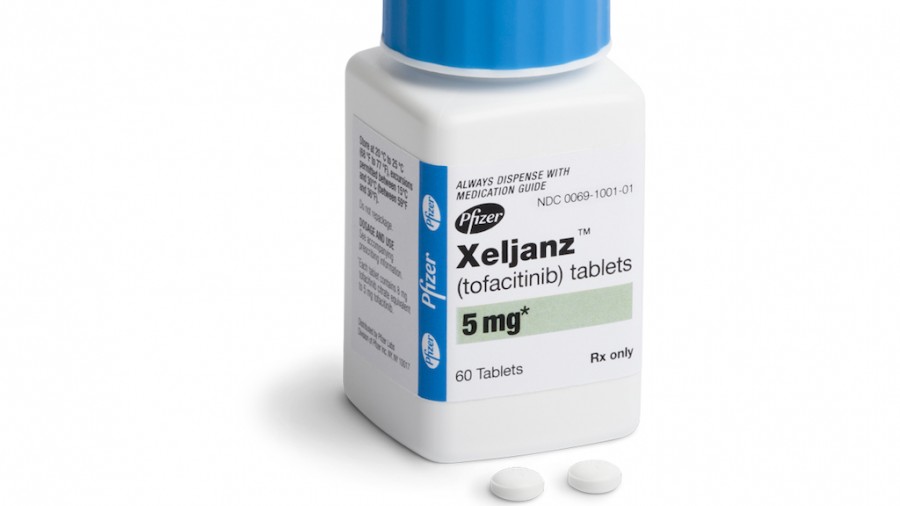 Pfizer’s FDA-approved JAK inhibitor Xeljanz is currently struggling with cardiovascular safety concerns. But another candidate in the family for which Pfizer has blockbuster hopes just slew a phase 3 in atopic dermatitis, teeing up a fight against Sanofi and Regeneron’s Dupixent.

Abrocitinib, also known as PF-04965842, a JAK1-specific inhibitor, met all co-primary and key secondary endpoints of a late-stage study in moderate to severe eczema patients aged 12 and above, Pfizer said Wednesday.

Specifically, more patients on both doses of the oral Pfizer drug achieved clear or almost clear skin versus placebo after 12 weeks, and a higher percentage of patients saw 75% or greater improvement of eczema from baseline, according to Pfizer. And the drug’s benefits already showed during the two to four weeks after the first dose, Pfizer said.

Efficacy aside, industry watchers might also be interested in the drug’s safety profile, what with the recent Xeljanz debacle in rheumatoid arthritis that flagged higher cardiovascular risks at a high dosage level.

No detailed data have been provided for abrocitinib, but “[s]afety looks good as fewer patients on drug than on placebo stopped therapy due to side effects,” Credit Suisse analyst Vamil Divan noted in a memo to clients.

Pfizer is obviously aware of the potential concern. In the only data it has offered, both low and high abrocitinib dose groups saw 5.8% discontinuation due to adverse events, while placebo experienced 9.1%.

The 387-subject trial is the first trial in the drug’s atopic dermatitis development program, and data from another study will come out later this year, Pfizer said.

Abrocitinib is one of the “15 in 5” new drug or indication launches before 2022 that Pfizer hopes could eventually reach blockbuster status. Now, the positive phase 3 results are putting it closer to challenging Dupixent.

“Dupixent is an effective drug for AD, but it is an injection, and patients usually prefer orals,” Cantor Fitzgerald analyst Louise Chen wrote in a Wednesday note to investors.

Dupixent ushered in a new era for moderate-to-severe atopic dermatitis in 2017 when it became the first biologic approved in the indication, and it just recently expanded into adolescents as young as 12. In the first quarter, the drug generated sales of €329 million ($368 million). Though its makers in part have the drug’s new asthma indication to thank for the expansion, the eczema market still has much more room for growth.

About two years after launch, Sanofi still considers itself “at the very beginning of adult atopic dermatitis,” Genzyme chief Bill Sibold said on the company’s first-quarter earnings call in April. The drug has reached over 50,000 U.S. patients, he said, only a relatively small proportion of the entire population of 300,000-plus. And the adolescent atopic dermatitis opportunity is about half that size.

Credit Suisse analysts tend to agree; according to their recent analysis of the overall immunology market, atopic dermatitis is far from saturated, with the potential for an additional $7 billion growth opportunity.