Axial spondyloarthritis (axSpA) is a grouping of long-term inflammatory diseases marked by chronic inflammatory back pain. Along that spectrum is ankylosing spondylitis (AS), where joint damage is visible on x-ray, and non-radiographic axial spondyloarthritis (nr-axSpA), where the joint damage is not visible on x-ray. All the parts of the disease spectrum include nocturnal pain, fatigue, morning stiffness and functional disability.

“These study results for Cosentyx build on our long-standing experience in ankylosing spondylitis and are a step toward a new treatment option that could allow patients to realize relief much earlier in axial spondyloarthritis,” said John Tsai, head of Global Drug Development and chief medical officer of Novartis. “If approved, this would be the fourth indication for Cosentyx.” 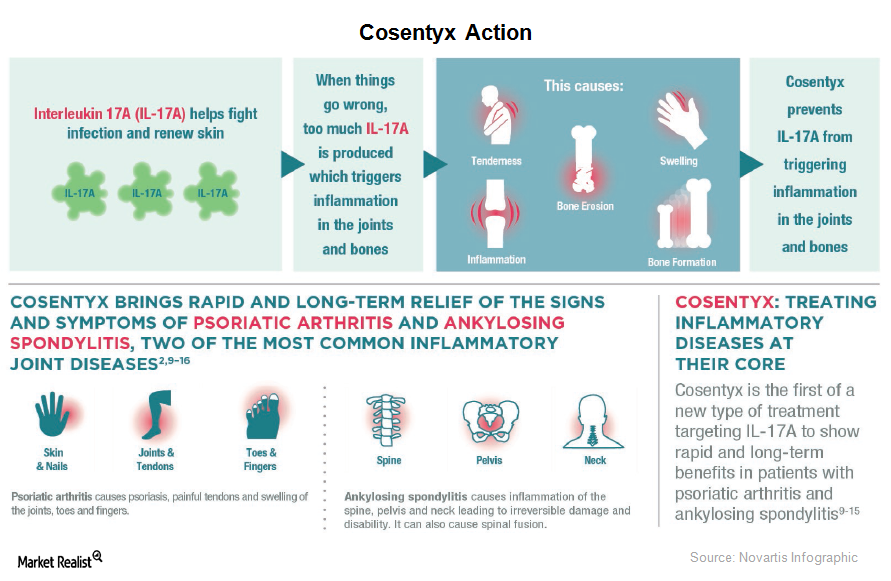 Cosentyx has been approved for plaque psoriasis, psoriatic arthritis and ankylosing spondylitis. In the first quarter of 2019, Cosentyx brought in $791 million, with $474 million of that in U.S. sales, a growth of 49% in the U.S. and 32% in the rest of the world. Cosentyx registered $858 million in the second quarter. The drug raked in $2.837 billion in sales in 2018, making it Novartis’ second best-selling drug behind its multiple sclerosis drug Gilenya.

The PREVENT trial is an ongoing two-year randomized, double-blind, placebo-controlled study with a two-year extension. It has enrolled 555 adults with active nr-axSpA, with an onset before 45 years of age and a spinal pain rated as greater than or equal to 40/100 on a visual analog scale (VAS) and Bath Ankylosing Spondylitis Disease Activity Index (BASDAI) greater than or equal to four, and who have been taking at least two different non-steroidal anti-inflammatory drugs (NSAIDs) at the highest dose up to four weeks before the start of the study.

Cosentyx is the first and only fully human biologic that directly inhibits interleukin-17A (IL-17A). IL-17A is a cytokine involved in inflammation and is linked to the development of psoriatic arthritis, psoriasis, and ankylosing spondylitis.

On September 5, Novartis signed a collaboration and option deal with IFM Therapeutics and its subsidiary, IFM Due (pronounced doo-way). Novartis will make payments to fully cover IFM Due’s research and development costs for a group of immunotherapies that inhibit the cGAS/STING pathway to treat a broad range of inflammatory and autoimmune diseases. It will also have the option to acquire IFM Due. If Novartis exercises that option, IFM Due’s shareholders will be entitled to up to $840 million in aggregate value including an upfront payment.